Some people call it the trouser legs . Some people call it The Pants Oh don’t call it that please. Today is a really exciting day for me. I’m going to visit some skyscrapers here, and some jawbreakers. Stuff like CCTV buildings. I’ve been waiting 10 like 10 years to visit this building. I can’t wait. So don’t miss the end of the video, where we’ll find out why CCTV building is shaped the way it is. And stuff like this behind me. The following are some great examples of Architecture Concept Ideas Examples Explained. 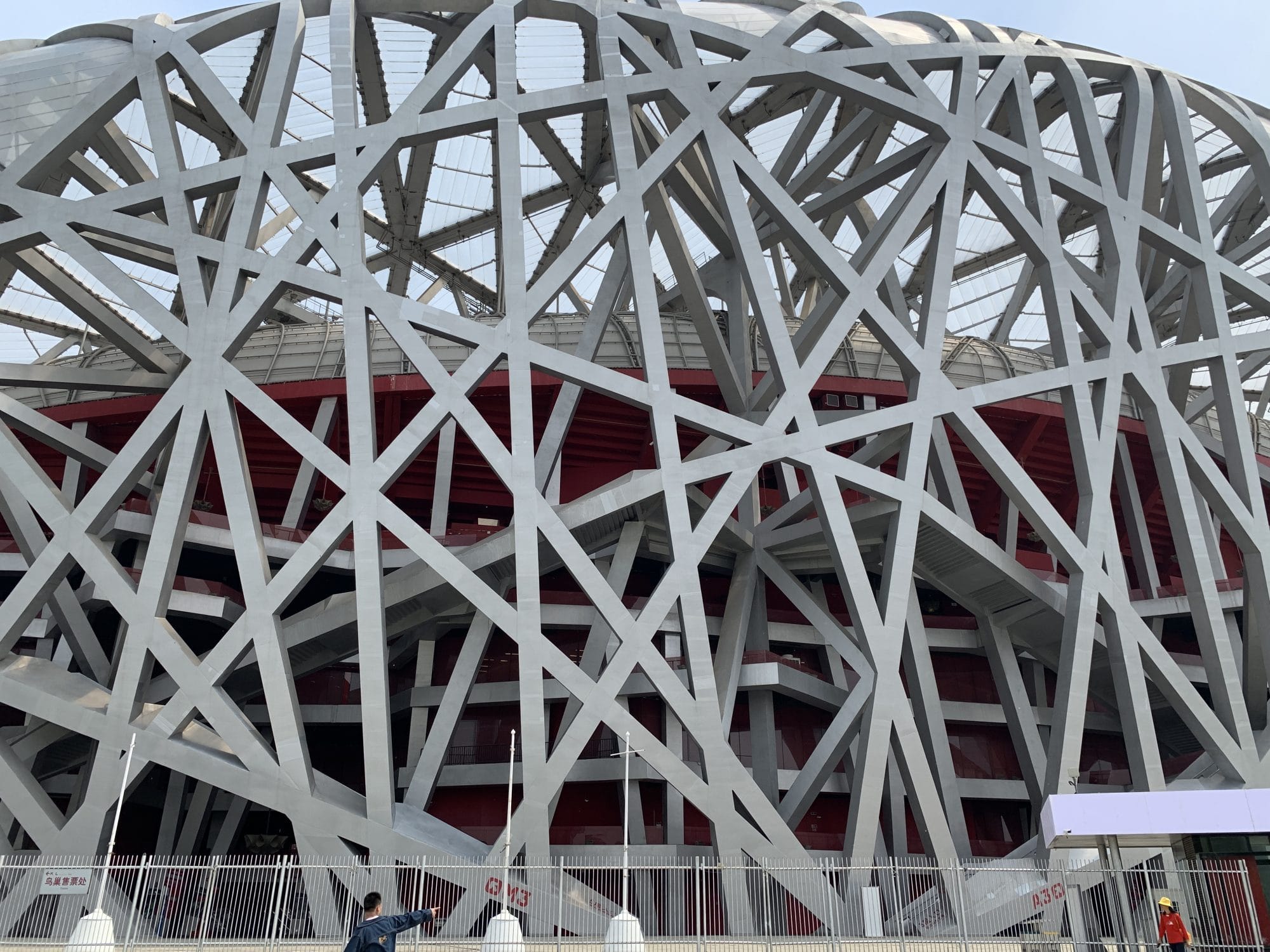 The Beijing Olympic Stadium, wasn’t originally intended to be a birds nest design.

Concept came from a bowl or a plate, in Beijing It didn’t come from a Birds Nest The design team was originally influenced by the study of Chinese ceramics

and cracked pottery shapes and forms. Then, when an artist saw an early design proposal, he quickly draw a bird in a tree, and gave inspiration for a birds nest.

Which became the concept everyone is familiar with. So the facade, roof and structure are all in one. And to keep the building waterproof, they have a translucent membrane at the top, for the roof of the facilities and rooms It took 5 years for construction and opened for the 2018 Olympics. Its going to be used for the 2022 Winter Olympics. This would be practically impossible to build without computers.

The bubble concept on the facade symbolizes the water bubbles from the swimming pool inside. The futuristic material in known as ETFE. Ethylene tetrafluoroethylene (ETFE) is a fluorine-based plastic. This plastic material is superior in translucency strength,, fire resistance and is self cleaning by the rain.

So this thing is even more spectacular at night. But unfortunately, I cant stick around here that long. Considering there is no sporting events on.

Ok this monster , is nicknamed The China Zun. Zun comes from ‘Zun’ – an ancient Chinese wine vessel, which inspired the building See it’s shaped in the middle? It curves in. In China, the Zun wine vessel represents communal good will. Its a simple idea and a good example of an effective symbol used as an architecture concept 524 meters.

The tower will remain the tallest in Beijing for a long time.

This amazing design concept goes against the typical skyscraper. And instead of going high; Its has two towers leaning against each other.
With a 75 meter cantilever So I think its around 200 meters in height So that’s easily a skyscraper. 100 meters is just a skyscraper. 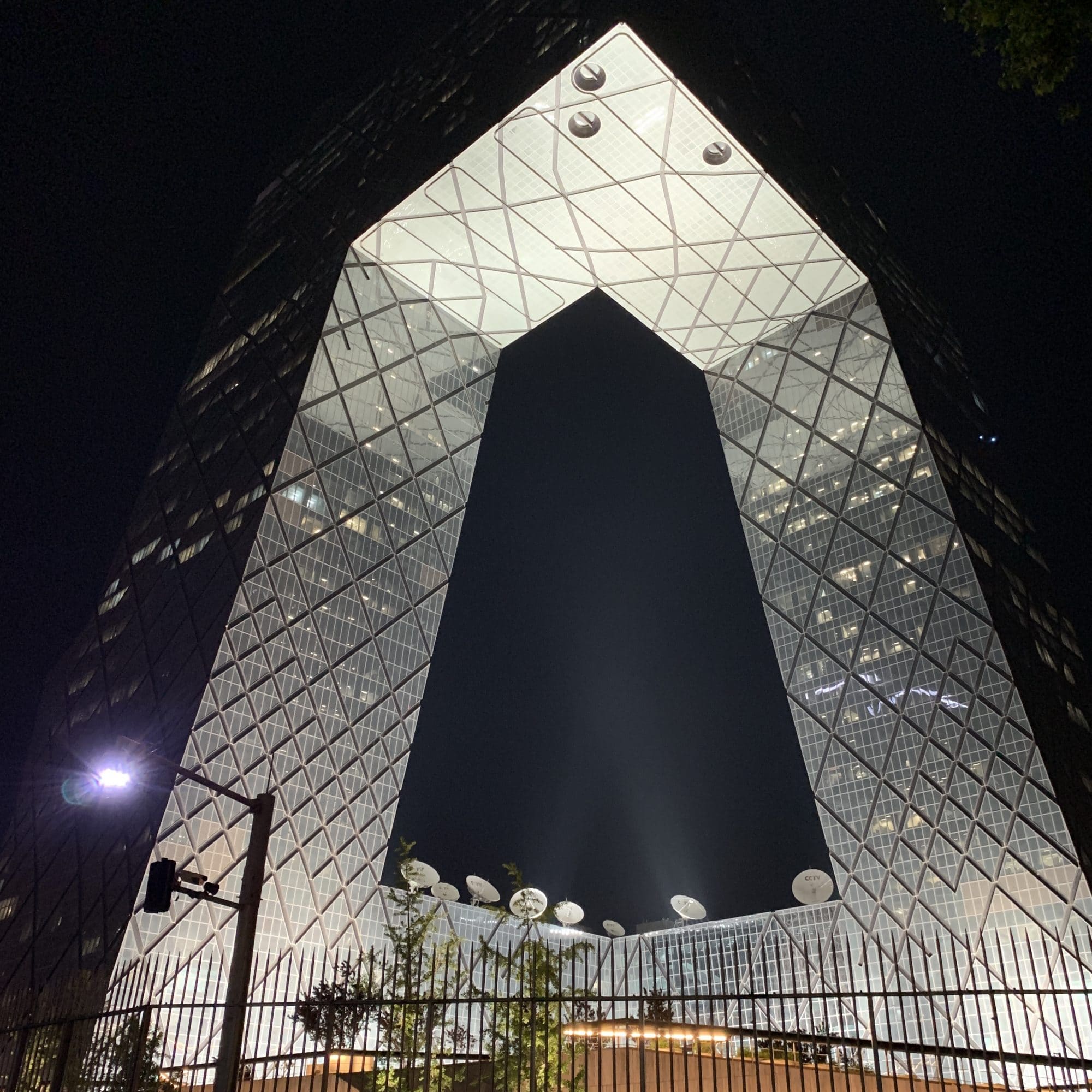 There are all sorts of rumors where the structural shape came from. One Chinese critic said it came from a pornographic image of a lady on her hands and knees. Of course, officially, this was denied Its more likely the concept evolved from a pyramid, which is cut out of areas relating to the surroundings. If you look at it from this angle, its kind of weird hey? (laughs) The structure for CCTV building is visible from the outside.

So this is what it looks like at night. It was said that the building concept and shape could never have been designed by the Chinese

But, then again, no one else but the Chinese would or could have ever built it. Designed by Rem Koolhaas and his mates
I think it was the biggest project they had at the time. The TV company used to be scattered all over he city 8his building brought the departments and TV broadcasting process together. So inside has got TV studios, offices, production and broadcasting facilities.

Unfortunately.. I don’t think I can go inside…

Russell is a Chartered RIBA Architect from the UK living and working in Tanzania. You can subscribe if you like:
https://www.youtube.com/user/architectrussell?sub_confirmation=1