From 5am to 11pm 7 days a week. Apparently it could take people 4 hours to get to work. Now it only takes them 45mins. That’s like giving 6 days back to people every years. Unbelievable. Dart is cheaper , and quicker Dart is also better for the environment because it reduces the amount of transportation and the rd which of course reduces pollution 👍🏽 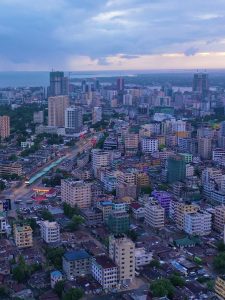 The first phase of the BRT is now complete which runs from the outskirts of the city in Kamara 20km away to the the city port, where u can easily hop on a boat to Zanzibar .

You can also get a couple of other lines going to Morocco Terminal and also Kariakoo.

With a population to reach approx 20million in the next 10 years the Dar Bus Rapid Transit (DART) system will help reduce congestion and will enhance growth and prosperity for dar es salaam and more importantly improve quality of life for Tanzanians. Karibu.

The term “Boda boda”, comes from bicycle Taxis when farmers used to carry items across the border in East Africa. With a hint of Swahili flare, the name changed from border border to Boda boda. Nowadays the term is used for motorbike taxis. When the distance, terrain and load is more difficult, Piki Piki are used which is another name for a motorbike taxi. This word presumably stems from when you get picked up – Piki Piki.

The Dala dala used to be illegal until around around 1980 when they became legal . The number of Dallas dalas have grown ever since. Inside they are usually over crowded and are often run by both the conductor and the driver . Dalas dalas usually run on fixed routes but they also pickup and drop off passengers anywhere on the route, sometimes even shortcuts. If you like your privacy and safety then maybe the Dallas dalla is not for you. But they are very cheap at around 400 shillings for a trip that makes them affordable for anyone in dar es salaam city.

In 2010 the Indian Bajaji was allowed on the streets of Dar Es Salaam. It’s an enhanced motorised version of a pulled rickshaw or cycle rickshaw. They have 3 wheel – apparently they don’t ever tilt. The Bajaj or sometimes refered to Bajaji in Tanzania originally comes from Pune India. Bajaj Autos which are the largest manufacturers of 3 wheeling automobiles in the world. Most people prefer bajaji over the motorbike because you are not exposed to direct sunlight slightly less dangerous than the motor bike and because they are fun.

The Bajaji in Dar Es Salaam

✅ Discuss this channel on the Community Tab:
https://www.youtube.com/user/mrrussellmhenderson/community