Swahili Food Near Me, Tanzania

This is about the day I went around Dar Es Salaam in Tanzania searching for what swahili food near me I could find.  Here are some of my takings.

A woody root vegetable shaped like a sweet potato. But looks more like a piece of wood. They are toxic if eaten raw so must be cooked correctly. Crispy on the outside and fluffy on the inside. So this is what they have usually for breakfast, the locals. So its one of the most drought tolerant crops in the world. Apparently its got a lot of starch in it. But you do need the salt and the sauce and salad And you eat with your hands here. Salad is spicy. Its like a relish with chili, cucumber Cabbage Good breakfast. Its very filling.

This food is a bit like a doughnut actual its nice. But not as sweet as a donuts.

Cassava fried Crisps . So, these are basically home made crisps Made from cassava, deep fried. They are nice because they are fresh. Taste a lot better than the ones you buy in the shop You know the crisps in the packet And you have them with salt or pili pili chili. So looks like I’m going to my second location wherever I can find any more Swahili food.

Ugali is a maize flour porridge.  To make it, the flour is usually cooked in water or occasionally milk. Its a bit hot though. You roll it into a ball It can be a delicious, cheap alternative to mash potatoes.

Eating Ugali for the first time

I never had this before. Its very bright yellow, tasty and good. So they pu a lot in there. Mishkaki, cassava, eggs, some herbs. chili, onion and some I think some red beans in there. crispy bits of either potatoes or cassava. There is at least two eggs in here. Boiled eggs. I think its a varied version where every you get it from. Lime in it. Its a bit tangy as well. And its quite thick as well its not like thin. This is one of the famous streets foods of Dar Es Salaam and Zanzibar. Its probably the best street food I’ve had in Tanzania since I’ve been here. 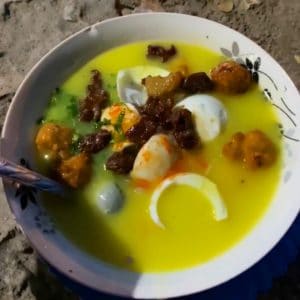 You can watch the video here below.