Seven o’ clock in the morning and I’m getting ready to go to Zhangjiajie National Park. Also known as the ‘Avatar Mountains’

So the plan is to go to the eastern entrance, get a bus to the cable car, then get a cable car ride to Area 1, which is the Tianzi Mountain area, hen have a look around there, hen get another bus to Area 2, which is Yangjiajie Scenic Area. Have a look around there. Then walk for 2 hours to the Golden Whip Stream, which is Area number 3. Then go to the main Entrance / Exit out of there. So the lady at the hotel told me she has friends up there and its clear – thats good news. And she gave me this rain coat which I’ll probably need.

Zhangjiaji National Forest Park is 1 hour drive from the City of Zhangjiajie,  in the Hunnan Province. There’s quite a few entrances to the park, this is the entrance I’m going to. Its 225 which is about USD $33 I’m a bit worried about these busses, I dont know which bus to get. It says ‘Cable Car Bottom’ which is where I want to go, so that’s ok. The Park is China’s first National Forest Park and is an UNESCO World Herritage site. I had to buy another ticket now for the Cable Car. Which is another USD $11. 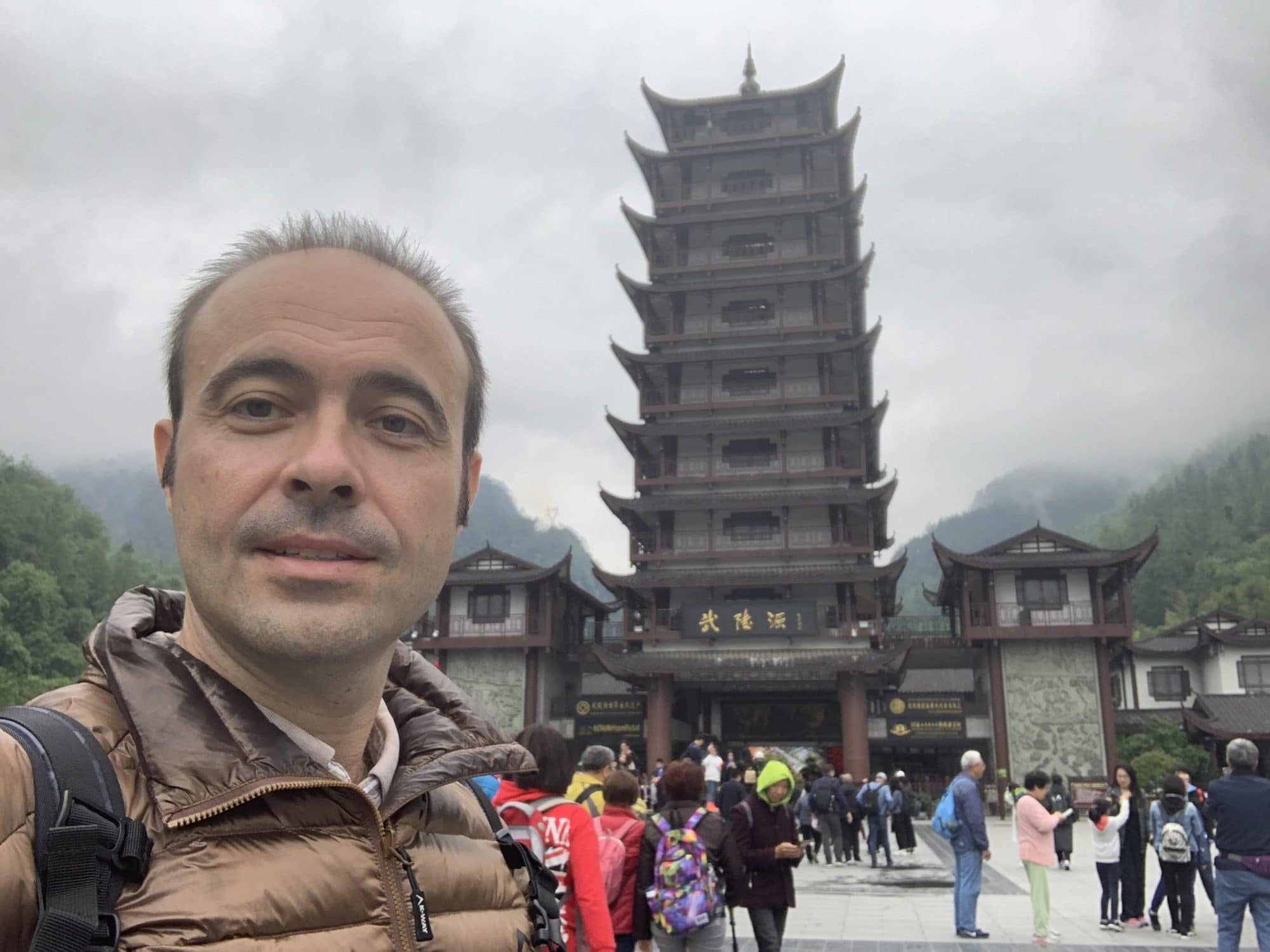 I can’t imagine anywhere in the world where you would see anything like this. Apparently, a Hollywood photographer spent time here And the mountains became inspiration for the magical floating peaks in the movie, Avatar. They even renamed one of the mountains after it. Its just really atmospheric.Amazing. Up the top of the cable car area. Feels like you are floating in the clouds more than it does the mist. After this place I have to get a bus to my first location. Bit more misty is this area, thats for sure. I heard that there’s gonna be a lot of steps today. Misty here, a bit more cooler. I think thats whay makes this place so special: Its hidden in the clouds, these columns. So people are always waiting for them to come out. Which is quite nice.

Walking thru the clouds. Can’t even see down the road.. So, I was quite lucky to see what I did see. Theres plenty of places to eat around here. Bus stop is down here. So you don’t have any trouble finding a place to eat. But thats China for you initi  really? I drinking this drink its kind of like a  Chinese Red Bull – god knows what it is. And this thing.Bit greasy but its alright.I found the other bus stop. Have no clue which one to get off. At least there’s a tourist info in this area Walk, follow the river for 1 hour. And then, that should get me to the exit. Says “Red Bull Vitamin Drink”.I didn’t realize Red Bull has vitamins in it .I’m skipping this other area, its got an elevator Supposed to be fast.Because I just been on the fastest elevator in the world in Shanghai. So don’t think I’ll bother going there. They are all going to the friggin elevator, I think

Looks like I’m going this direction down here. Here’s the sign – I think its right. No one else seems to be going down here though  (laughs) Just before 2 o clock so. See how long this will take me. I should get there by 3. There is already a nice view, I can see.

Vertical joints were already formed in the earth here, 400 million years ago And the strange vertical mountains made of quartz sandstone are a result from many years of mostly physical erosion. Now I’m glad I came this direction. The hotel was correct about which way to go.  I can’t believe there are not many people here.

I think I can take off my hat now. Its getting a bit warmer as you go down. Some girl asked me on the bus: “Do you know where the Avatar Park is?” Friggin’ hell, this whole place is the Avatar Park.Tell you one thing, Im glad I’m not walking up this. I’m glad I’m going down. You gotta be crazy to go up this. I could get lost up here easily on my own. And no one will know. Ahh just wanna get the hell out of here now Its a long walk. Down. This is not the kind of place you want to twist your ankle or fall over.

You gotta a Red Bull?We’re here?According to that guy back there. Its another hour left.Friggin hell. I thought it was an hour, an hour ago.Oh shit.So I was up there, an hour, 2 hours ago.I think it was worth the walk down after all that.10 past 5 now.God, I’ve been walking for ages.Its not 1 hour.More like 3. At least. I just past another sign that says 50 minute walk. Oh this is good at the end you see all the mountains around you. Nice.Thank god, I made it down. Well I gotta find the bus yet.

So is 1 day enough for Zhangjiajie National Forest?